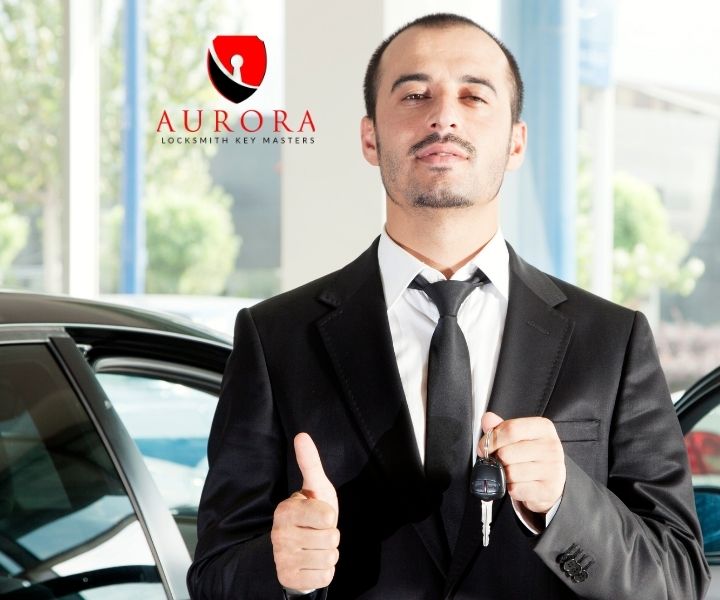 Aurora Locksmith Key Masters is a professional locksmith company that deals with car locksmith services, among other solutions. Here, we share some thoughts on transponder keys and what to do if you need to get them programmed or if you lost your transponder car keys.

What are Transponder Car Keys and How do They Work?

The word ‘transponder’ is a combination of the words ‘transmitter’ and ‘responder’. Most cars manufactured after the mid-1990s use some version of transponder technology for their keys and ignition systems. Before that, vehicles used the standard key technology to be able to start the engine. This meant that a key had to have a unique physical shape to open car doors and turn the engine. The problem with this is that it is incredibly easy to duplicate keys in this manner, thereby putting a car at risk of being stolen. Transponder car keys changed the game for security.

This is how transponder car keys work – The key is placed in the steering column. There is a portion of the car’s computer, the engine control unit (ECU) that sends out a signal to the car key itself when the key is being used to try and start the engine. There is a computer chip at the head of the car key, that takes in the ECU signal, and then sends out one of its own. Unless this signal matches up the exact one that is expected, the engine won’t start.

Transponder devices were a huge improvement in the safety of cars, trucks, and motorcycles. Before they existed, criminals simply had to make a quick-and-easy copy of your set of car keys to possess your vehicle. Transponder car keys changed the rules. Even breaking the steering column and touching wires together won’t start an engine anymore. Unless the car’s engine control unit receives the expected signal, the engine simply won’t start.

Many vehicle manufacturers have begun using transponder chips for cars to ensure vehicular safety. This fact is typically a good thing unless you lose your transponder keys. While transponder car keys make it much more difficult for crooks to steal your vehicle, it also makes it much more complicated if you lose or misplace your car keys and need to replace them. If you have recently replaced your car key, you have noticed it is no longer a quick, cheap, “cut to replace” process.
Simply getting another set of the cut is not enough. To use the keys, the chip needs to send back the appropriate signal to start the car.

What is transponder chip key programming?

Why are transponder car keys so difficult to replace?

While this relatively new key technology is great for preventing theft, it also makes replacing lost or broken keys difficult unless you know a locksmith with the correct transponder chip key programming equipment.

Transponder car keys are tough to replace because transponder chip key programming involves a unique key identification code programmed during manufacturing. When the key is lost or stolen, you no longer have a key with the code necessary to start the car. Even if you have a metal replacement cut, the missing chip will prevent the car from being used. Many auto dealers try to remedy this by replacing the entire computer system, which can cost hundreds or even thousands of dollars. However, if you find a quality locksmith, you do not have to fork over all that extra cash for a new car computer. Instead, auto locksmiths can offer key reflashing services and chip keys for cars.

What options do I have if I lose my transponder car keys?

If you lose your transponder car keys, there are better options for a new transponder key system other than a costly tow to the dealership or replacing your auto computer. Some car locksmiths offer key reflashing services for transponder key replacement. Here, the locksmith relocates and removes the computer system of the car. Then, they find the chip for transponder chip key programming.

Do some transponder systems have a security flaw?

Automakers have switched to remote keys and smart keys because they are supposed to be safer. It is certainly true that these types of electronic keys do make it harder for the average criminal to take off with your car. However, the electronic key fobs are not invincible.

Hackers have been able to exploit a flaw in 25 makes of vehicle, including common brands like:

Many luxury brands like Ferrari and Porsche made the list as well.
Here at Aurora Locksmith Key Masters, we felt it was important to share this news with our readers. After all, those of us who have cars rely on them and need to be aware of anything that could make it easier for thieves to take them.

Some automobile manufacturers, notably, General Motors have taken steps to close this security loophole. Others have failed to address it, even though they’ve known about it since 2012.

There is not a lot you can do about the loophole — if hackers and car thieves want to steal your car, they will probably get access. Fortunately, most car thieves are not highly sophisticated hackers or know how to program car keys. Most are opportunists. The vast majority of cars are stolen because they’re left running (which is one reason “warming up your car” on winter mornings can be dangerous).

The biggest issue most people will face with a transponder key is the loss of a key or a key malfunction which requires them to call an automotive locksmith for a replacement.
However, if you are truly concerned it might be a good idea to update your auto insurance policy. If you’re carrying the bare minimum, for example, then you might want to choose a comprehensive policy that will reimburse you if a thief manages to hack your transponder key.

It is worth noting, however, that no active hacker-thieving incidents have made it into any news story. To date, there just don’t seem to be any criminals out there who are exploiting the loophole. It may require more time, effort, equipment, and trouble than it’s worth.
This loophole has simply been exposed by cyber-security experts. In time, we’d expect more automakers to invest in closing it. For now, it’s just something to be aware of…not something to lose sleepover.

Many locksmiths simply struggle to solve transponder key service issues because of their lack of knowledge in transponder key programming. If you have lost your car keys, and your car is recently enough that it uses transponder keys, then you better make sure that the locksmith company that you use can modify a car’s ECU for it to produce the appropriate signal for newly made keys.

Most locksmiths simply don’t have the capabilities to do this, so be sure to ask before they send out a technician to help you if you are locked out of your vehicle.

If you are lucky enough to be located in the area, there is no need to panic or stress out due to faulty transponder chip key programming. Aurora Locksmith Key Masters offers key reflashing services and chip keys for cars in Aurora. We offer a full range of automotive locksmith services for foreign and domestic Cars.

Aurora Locksmith Key Masters understand how frustrating it can be to lose your new transponder key, which is why our mobile locksmiths serve Aurora and surrounding areas.

We can arrive in 30 minutes wherever you are to help you feel safe and get you back on the road again as soon as possible.